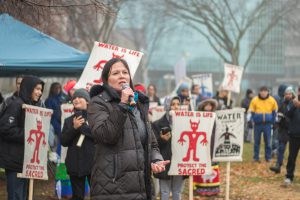 Chippewas of the Thames First Nation is a  proud Anishinaabek nation in Ontario.  Our Nation is part of the  Chippewas who have occupied present day Southwestern Ontario for centuries.  We continue to assert Aboriginal and treaty rights with respect to the lands and resources within our traditional territory, including the air and the waters.

Where the Pipeline Crosses the Territory & the River

In this connection, there is a matter of pressing concern to our First Nation, and that is regarding the National Energy Board decision to approve an application by Enbridge to reverse the flow and allow bitumen to flow through Line 9, which runs through our territory and has the potential to adversely affect our Aboriginal and treaty rights.  We are very concerned because of the potential environmental harm, but also because the decision was made without  Crown consultation or accommodation of our interests.

First Nations’ Aboriginal and Treaty rights are constitutionally protected and as such we are not merely stakeholders in resource development projects. Both domestic and international law recognizes the importance of Indigenous Peoples’ relationship to resources the activities that take place on our traditional territories.  The current government in office commits to the implementation of the UN Declaration on the Rights of Indigenous Peoples.  The United Nations Committee on the Elimination of Racial Discrimination emphasized the need for Canada to include Indigenous Peoples in decision making, recommending that Canada, “[i]mplement in good faith the right to consultation and to free, prior and informed consent of Aboriginal peoples whenever their rights may be affected by projects carried out on their lands, as set forth in international standards and the State party’s legislation.”

2016-November    Hundreds of allies gather in front of the Supreme Court of Canada to advocate the recognition for the Constitutional Duty to Consult.

2016-November    Chippewa attends Ottawa to have their case heard by the Supreme Court of Canada.

2016-January      Honouring Feast for Rachel Thevenard for her commitment to bring awareness to constitutionally protected Aboriginal and Treaty rights.

2015 – December  Rachel Thevrand begins her Run Against Line 9 B 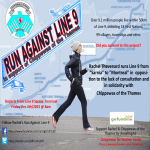 2015-November   Enbridge Ground Control Plan submitted to NEB November 13, 2015 – will this be adequate? we invite comments, send responses to info@cottfn.com – the plan  here